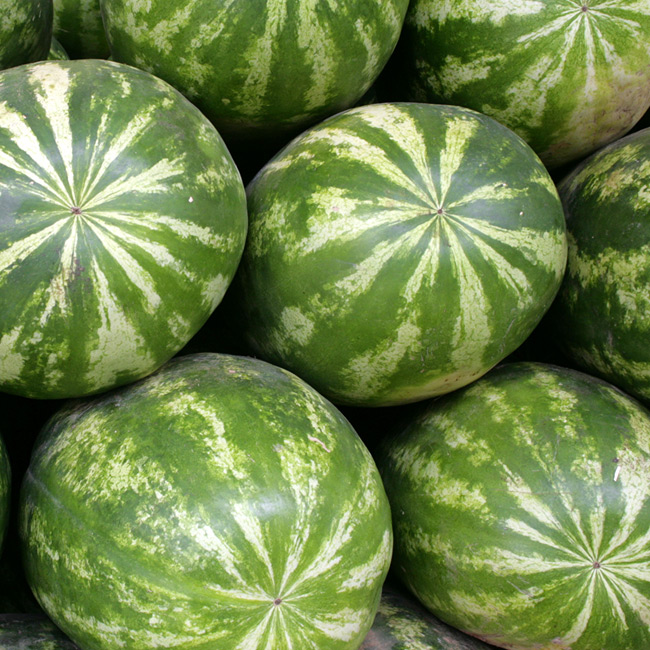 The watermelon is an annual that has a prostrate or climbing habit. Stems are up to 3 m long and new growth has yellow or brown hairs. Leaves are 60 to 200 mm long and 40 to 150 mm wide. These usually have three lobes which are themselves lobed or doubly lobed. Plants have both male and female flowers on 40-mm-long hairy stalks. These are yellow, and greenish on the back.

This plant is listed on the Threatened Species Programme of the South African National Biodiversity Institute.

The watermelon is a large annual plant with long, weak, trailing or climbing stems which are five-angled (five-sided) and up to 3 m (10 ft) long. Young growth is densely woolly with yellowish-brown hairs which disappear as the plant ages. The leaves are large, coarse, hairy pinnately-lobed and alternate; they get stiff and rough when old. The plant has branching tendrils. The white to yellow flowers grow singly in the leaf axils and the corolla is white or yellow inside and greenish-yellow on the outside. The flowers are unisexual, with male and female flowers occurring on the same plant (monoecious). The male flowers predominate at the beginning of the season; the female flowers, which develop later, have inferior ovaries. The styles are united into a single column. The large fruit is a kind of modified berry called a pepo with a thick rind (exocarp) and fleshy center (mesocarp and endocarp). Wild plants have fruits up to 20 cm (8 in) in diameter, while cultivated varieties may exceed 60 cm (24 in). The rind of the fruit is mid- to dark green and usually mottled or striped, and the flesh, containing numerous pips spread throughout the inside, can be red or pink (most commonly), orange, yellow, green or white.